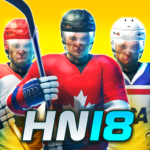 Experience the speed and intensity of Ice Hockey with the return of the HOCKEY NATIONS franchise! Deliver those big hits, wind up a howitzer of a slap-shot and aim a well-timed wrister while playing in 7 thrilling tournaments in HOCKEY NATIONS 18.

HEATED RIVALRY
Some of the greatest hockey rivalries battle it out in the RIVALS SERIES. Take control of the game and earn those bragging rights with 50 intense challenges!

DREAM OF GOLD
What better way to enter the world of International Hockey than skating out for your team in the Winter Games! Go stick to stick with some of the greatest teams and come away with the gold medal!

LIVE GAMES
Join others and compete in regular LIVE GAMES. Earn points for your team and lead them to victory. Prove you’re the one of the best as you climb to the top of the influencers leaderboard.

PLAYOFFS
North America or Russian Playoffs, the choice is yours. Choose your team and lead them all the way to the Playoff Final. Will you take home the trophy?

OUTDOOR SERIES
See the game in a whole new light! Under the cold blue skies of ponds and stadiums, six teams will battle it out to be crowned the OUTDOOR SERIES CHAMPIONS!

Important
This game is free-to-play but does include optional in-app purchases to access some of the game modes, which can be purchased with real money.