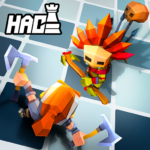 Join the ultimate combat and fight your rivals on a chess board arena. Think over your playing style and put your strategy and tactics skills to test in this cool game. Gather an unstoppable team of fantasy warriors and lead them to victory! ?

Download this fun battle game and check out what it has in store for you:

MULTIPLAYER BATTLE ARENA
Like in other MOBA fight games, you will compete against other players, each heading a team of warriors. But it’s not the typical MMORPG online strategy because this in-game location differs completely from other multiplayer war games. Here, you will struggle with your rivals in a 3d battle chess arena! It’s like playing chess online while armed with deadly weapons.

LEGENDARY HEROES
Gather a team of famous fantasy heroes to fight for you in the battle land. Every hero belongs to a specific class and has unique battle skills. Collect three heroes of the same class or race and merge them into a stronger unit. Place them onto the chess board and let them squash the enemy.

WAR STRATEGY AND TACTICS
Discover your commander’s talent in this fun battle game. It’s similar to tower defense games but much better! In each round, your team will struggle against new waves of rivals. To stand up to your enemies, invent clever strategy and tactics. Catch your rivals off-balance with intricate maneuvers and cunning attacks. Try playing chess online with fantastic characters instead of chessmen.

ECONOMIC STRATEGY
Warrior mastery isn’t the only skill that makes a good commander. A true mastermind needs to make wise economic decisions as well so his troops can flourish. In addition to working on your war strategy, you will need to hone your economic tactics. Invest coins into new mercenaries or save for the next round. You won’t have a second life, so manage your energy and coins wisely.

HELPFUL GAME UPGRADES
Make the most of game boosters to increase your war power! Expand the limits on the number of warriors in the battle and for those in reserve, boost your bonuses, and access precious gold coins! Whatever it takes to dominate the battlefield!

Heroes Auto Chess is one of those free addicting games that grabs your attention and keeps you wanting more. If you love playing tower defense games, you’ll like Heroes Auto Chess as well. It blends the intense action of fight games with economic strategy features and gorgeous 3d graphics.

Download this epic war game for free and enjoy it in both online and offline multiplayer modes.

Your warriors are waiting on your word to send them charging into a brawl! Join Heroes Auto Chess now and watch as your rivals crumble into dust before you!

Join other fighters, share the game with your friends and write reviews on the Google Play!