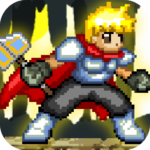 Hammer Man has a magic Hammer.He is a dungeon hunter. He smash monsters,goblins and all evils alone. Run, jump and smash your way through a vast world of platforming challenges and embark on an epic adventure! The mobile smash and crash adventure game and a 2d pixel platformer, now also available for Android phones and tablets.Help him on his adventure to stand against darkness and bring back the peace and serenity that once was.

Hammer Man is a story about a very powerful hero who is destined to protect the king in a kingdom.

The hero will encounter and fight the dark knight which has a very strong magical power to rule all the creatures underworld to be his powerful army. The dark knight can influence the entire army to kill the king in order to get the power to conquer and rule the entire kingdom.

The dark knight has the power to summon all the monsters to kill the hero . Only special Hammer can kill the dark knight and his entire evil magic influences.

If you enjoyed those classic smash and crash platformer 8 bit adventure games, then you’re going to love this. Forget to connect or search for your old consoles, you will be able to revive the nostalgic childhood memories on your Android device!

** ! Play With The Most Fearless Adventurer, Be The Hero, and Join The Quest To Save The dark Planet Now!
Our old retro style addicting game will be now one of your top favorite free adventure games. As we want to keep the vintage style platformer, you don´t need an internet connection to play. Lovingly designed, we conjure up the spirit of old school adventure games giving an epic twist to the story so you can feel you´re still enjoying the most famous brothers saga on new adventures, with new enemies and new characters in this platform

A GREAT ADVENTURE
• Explore a magical realm of dungeons, mountains, treasures and devious monsters.
• Gain experience and level up your character.
+ Lots of dark environments and monsters.