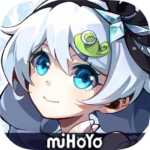 In an apocalyptic world, what would you do to survive when your school friends got turned into zombies? What would you do to save your loved ones?
Collect different weapons and clothes to make yourself stronger! Beat the zombies and save your friends! Although the apocalypse has already upon us, you still have the chance to find out the real reasons behind it and stop the total destruction of humanity. Take care of yourself in this dangerous world.

GAME FEATURES
1. Simple, pick-up-and-play arcade action game with anime elements.
2. A lot of unlockable content, including powerful weapons, pretty uniforms, helpful badges and 5 playable characters.
3. You can use 230+ weapons, 120+ uniforms and 130+ badges to create your own build.
4. You are not alone, there are 38 different familiars and you can select one as helper during the stage.
5. Famous Japanese and Chinese dubbing specialists.
6. Use original songs as BGM.
7. Different events in game every week.
Official Facebook page: https://www.facebook.com/ggzAsia/

【Honkai Idol Festival】
Who will be the brightest star on the stage?
Support your beloved idol to win the final victory!
【Night Visit to Thorn City】
Who disturbed the slumber of Thorn City’s master? Thorn City will be opened to those warriors of wisdom and courage.
【️New Chapter: Light & Shadow】
Awaken the ancient power of the characters!
【️Episode 4 of DLC】
We are chasing the fire of life and cherish what we have at the same time. This is us, “Moths in Fire”
【️Familiar Battle】
Familiar Battle will be opened. It’s a different kind of battle.
Vote for your favorite familiars!
Are you prepared?
1. New event: ‘Honkai Idol Festival’, ‘Night Visit to Thorn City’ and ‘Familiar Battle’;
2. New story chapters: ‘Light and Shadow’ and ‘Dry Fire’;
3. New equipment and familiars;
4. New system of ‘Character Stigmata’;