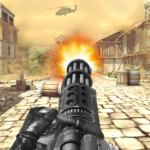 Welcome to the world of Guns Game, the ultimate gun simulator for your android or tablet with real warfare shooting missions.

Gunner Battlefield: Fire Free Guns Game Simulator brings you the digital guns camera 3d simulator to initiate a fully interactive real-world hero-shooter experience. Defend yourself, load the magazine to rack the slide and free fire the target with best guns shooting simulation control. Moreover, you can enjoy all of these firing battleground offline.

Join the best machine gun simulation game with heavy machine guns & helicopter gunners to have the fun shooting of amazing firing effects and fire of destroying bazooka with the unknown squad of fire battlegrounds and enemy troops. Get ready for ultimate guns simulator with all offline shooting missions because it will help you in the futuristic military war games and other combats of real-world war. You have multiple types of guns like SNIPER, assault rifle, handguns, machine guns and many other battlefield weapons for free to fire. So, start this free to play gunner shooting game and boom the battlefield with the heaviest firepower you have & free fire all of your enemies with this amazing action game.

Hurry up, player! a new battlefield is just going to start & enemies special forces are getting ready for counter attack on our defense lines, you have to prove that you are the real shooter hero of war games but all you have to do is to download and install this best shooting game and show your guns shooter skills. Select any great gun adventure among all the available modern guns of your choice. Experience gunner shooting with machine gun camera 3d games. You will soon be in the survival battleground of free to fire gun games. so get your self trained with the free gun game simulator. Be the best FPS shooter of real 3D shooting games.

Pick up your favorite gun from an inventory of FPS weapons, sub-machine guns, and heavy machine guns. Come and experience the ultimate 3D shooting game. You are free to fire in the gunner’s battlefield, enjoy counter-terrorist attacks and gun shooting like never before.