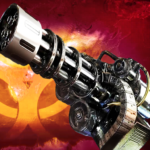 Armies of mindless zombies are taking over the world! So, stand up and fight back against the undead hordes of brain-hungry zombies. These repulsive monsters crave the sweet taste of human brains but you’ll only feed them hot lead. Our Zombie Game have all the blood, guts, gore, and glory you could ever want!

Zombie 3D Gun Shooter is as you would expect – a bloodthirsty 3D first person shooter game in which you must fight against wave after wave of deadly and realistic looking zombies. You must survive one wave at a time – each wave presents a greater number of zombies and they become harder to kill too. You’re a survival man, and use the gun in your hand beat out a bloody path!

It’s free shooting game and especially is one of offline games, let’s download it for free and to be a legend, kill all the mad and save the world!

Now you can experience an attractive zombie shooting game.It would be a best zombie game ever, we always want to hear from you, your feedback is the motivation for us to create a good offline game and make it better every day!
v1.1.8
– Added a new setting: Blood color.
– Various bug fixes
The fight continues, zombie shooter！