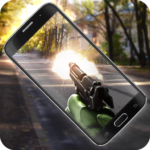 Feel the weapons energy with augmented reality features in the Gun Camera 3D Simulator app on the phone screen.

Download and install the app on the phone. Choose the weapon model. Turn on the device cams and control the virtual weapon on the phone screen. Shoot, reload, throw grenades and earn coins to unlock the new weapon model.

For choice, the player has the 3D models pistols, machine guns, sniper rifles and hand grenades collection. Each weapon model is felt as an item you holding before the eyes.

Use a night vision goggles and thermal imager. The game goings to be fascinating thanks to cool special effects. Audio and visual effects immerse yourself in the app atmosphere.

Read carefully!
Gun Camera 3D Simulator is the safety phone app. The app uses the firing imitation from the weapon and created by professionals.
Dont forget that the Gun Camera 3D Simulator app is the game and doesnt bear any danger to the player health or others.
The development team call on NOT to use real guns in life. Its safety and exciting in the augmented reality programs.
Bugs fixes.