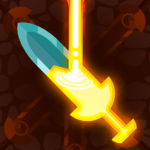 Train and hire blacksmiths so we can equip our warriors with the best weapons we can craft. As you improve your idle forge, our troops will get epic gear to put in their inventory slots – new armour for health, new swords for attack, new staves for magic.

Is this an RPG? Is this strategy? Is it idle? All three at the same time. Raise your empire by equipping your soldiers, and let them train and raise health while you’re afk. Your blacksmiths will work tirelessly to equip the hero and warriors with epic loot so they can go on mighty quests to forge empires & puzzles.

Tap to upgrade your smiths and produce better magic gear. Your army will start winning even when you idle and start defeating enemies, and collecting loot. With this loot, you can craft epic swords, bows and axes to unlock better troops and win the war while you AFK heroes.

Heroes live and die, but their weapons are eternal. Make the best gear for heroes.

The blacksmiths have opened and your armies are ready – it is now time to forge your empire. Literally.