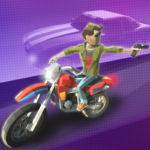 TPS offline game modes:
Thug life simulator game has two addictive game modes. In the FREE to PLAY mode, you are not required to carry out any quests or tasks. Theft car, explore Unlimited Los Angeles open world city full of surprises in low-poly art style.
In offline campaign game mode, you will deal serious business and restore order in the Los Angeles crime city. Perform tasks, earning money and experience.
For the game money, you can buy powerful weapons or game boost, which will make the game more addictive.

Mafia wars:
To become Polygon real gangster in the open world, you should take control of the Vegas crime city and win in real city wars. Clear Vegas crime city from mafia crime. Fight the mafia gods in thug life style, using everything that will be at hand. You can kill mafia by a car that you theft, shoot mafia gods with any weapon, or arrange a diversion. Theft helicopter from a military base or come on a tank that you theft. Make it clear who is real gangster and godfather here!