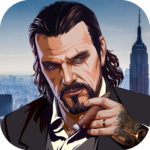 Gangster Gene is an exciting new gangster themed RPG game. You will inherit the hard fought territory of your father at a crucial time when the gang is in turmoil. You must summon all of your assistants to survive, determine who the traitor is in your midst, and uncover the truth behind the framing of your fellas. All of these conspiracies are mere trifles when you are to be swept into the world of Gangster Gene.
Gangster Gene is a game that strives hard to replicate all of the details and aspects of modern gang life. From gang firefights and political rule to the money and details of organized crime, players will be immersed in an authentic life of a gangster.

Features:
• Reunite the Gang – Control the city again, and punish the double crossers!
• Determine the Traitor in the Midst – With a monopolized crime network at your disposal; all the clues are awaiting your investigation.
• Recruit Assistants – Hire the right men into your law breaking firm.
• Meet a Sweetheart – Encounter women with various temperaments. Seek the one you love.
• Support Affiliated Gangs – As a rising family, entice smaller gangs into your growing branches.
• Underworld Arena – Gang lords from around the world will send out their strongest soldiers to determine which family is the best!
• Form Underworld Alliances – Find other crime bosses and forge alliances that will battle for a supreme position at the top of the world!
Fixed text of event issue

The Myth Seekers: The Legacy of Vulcan