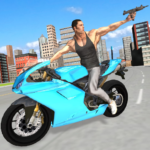 Be the ultimate crimeboss of the city and take on rival gangs in one of the best open world gangster crime simulators. Explore the huge city, drive fast vehicles, explosive action, and gang vs gang combat to take control of the city, all to become the real gangster crime boss!

Rise up the rank of your crew as you take on rival gangs, crooked police, and mercenaries! Take control of the city and become the boss of the crime capital, whatever it takes to become one of the best gangsters in the ultimate crime simulator!

ALL-NEW GANGSTER CRIME OPEN WORLD TO EXPLORE!
*Exciting action combat, fighting and shooting your way through thrilling missions; help your crew when they call you up to go against other gangs and other action in the crime scene of the underworld.

*Incredible HD graphics, experience the crime world in all of its glory and the amazing gangster action!

*Switch to different gang members at any time, each with their own custom stats for unique gameplay and combat style.

* Equip and upgrade your crew with the best guns and vehicles to trick out your character to your own style of gangster action and driving.

TELL YOUR OWN STORY!
*Join in on the best action and claim the city for your own! Defend your turf from rival gangs, the gear you earned throughout your time as the ultimate gangster will aid you in beating out potential takeovers from other city gangsters.