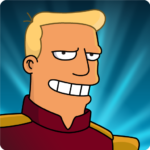 BUILD your own New New York, BATTLE aliens, COLLECT your favorite heroes, and EXPLORE space in an epic Futurama story from the original writers!

Relive the show in this thrilling and hilarious game that will have you in tears laughing. The funny never ends when you play as Fry, Leela, Bender or any of your favorite characters from the critically-acclaimed Fox series, Futurama! Is the future safe in your hands? PLAY FUTURAMA: WORLDS OF TOMORROW to find out!

Buckle your seatbelts, blast off into space, and play the new Futurama game!

– ADVENTURE AWAITS: All new story from the creators of the original Fox series, Futurama!
– BUILD A CITY: Create and customize your very own New New York!
– CHOOSE YOUR STORY: Control the story by making your own choices!
– 8 BIT FIGHTING: Battle in epic and funny 8-bit combat!
– SPACE TRAVEL: Embark on funny space adventures as you explore a galaxy of new worlds!
– FUNNY OUTFITS: Complete your character’s look by unlocking hilarious and unique outfits!
– CUSTOMIZE EVERYTHING: Personalize your look, and level up your characters!
– HILARIOUS DIALOGUE: New Futurama stories from the show’s writers, David X. Cohen and The Simpsons – creator, Matt Groening!
– CHOOSE YOUR CREW: Select your crew and send it on adventure-filled space missions!
– COLLECT ARTIFACTS: Equip ancient artifacts to ensure the universe’s best chance at survival!

Download the game and embark on the all-new adventure imagined and written by David X. Cohen and Matt Groening! New worlds, strange species, and unforgettable stories are all waiting for you!

Futurama: Worlds Of Tomorrow is free to download and play, however some game items can also be purchased for real money. If you do not want to use this feature, please setup password protection for purchases in your settings.

Futurama TM and © 2017 Twentieth Century Fox Film Corporation. All Rights Reserved.
NEW FEATURES:
– Nixonbuck and XP Collector: Instantly collect all Nixonbucks and XP from Ready to Collect Buildings in your New New York!
– Player Versus Player Combat is coming back with new prizes! Check it out during an upcoming event!
– Bug Fixes!