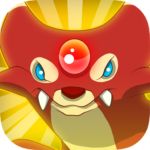 Fusion Masters is a cartoon fantasy card game where you create a customizable team of elemental monsters from a varied collection of cards!

FIRE, WATER, NATURE OR DARK – WHAT WILL YOU CHOOSE?

Construct the ultimate deck with dozens of collectable monster cards, each with different playstyles! Battle strategically against a challenging exploration mode and defeat the most powerful masters and their monsters!

Hatch monster eggs and receive brand new monsters! Train and fuse them together to create various and more powerful cards!

Duel players around the world for huge prizes and rewards! Do you have what it takes to become the best Fusion Master and reach the top of the Arena highscores?

✔Four distinct elements of monsters to control with different playstyle. Will you favor Fire, Water, Nature or Dark?
✔Dozens of different monsters to collect with multiple fusions! Fuse and Train your monster cards to become more powerful version of themselves!
✔Create a strategic deck and win against your opponents.
✔Fight in the Arena against thousands of other players around the world and prove you have the best monster deck!

This app allows you to purchase virtual items within the app and may contain third-party advertisements that may redirect you to a third-party site.

Visit our facebook page at https://www.facebook.com/WIPGameStudios to get more info about all our upcoming titles and updates.
Follow us on Twitter at https://twitter.com/wipgamestudios
-15 New Cards
-2 New Campaign Zones
-2 New Languages: Spanish and French
-Lots of adjusts on cards stats, spells and progression values
-Ajdusted all Explore Zones
-Improved rewards on eggs based on player level
-Increased Gem amount on purchases
-Added Game Credits
-Fixed a bug with Clone spell
-Fixed a bug with maximum inventory when buying eggs