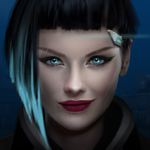 The AI Crisis caused untold destruction across the cities of humanity, with human forces winning a hard-fought, epic battle against the robot uprising. Decades later, the balance of power has been restored, and mankind has harnessed technology like never before, bridging human minds to powerful AIs in order to pilot a new breed of mech: Fusion Guards.

Now, peace can only be maintained through strength. Commander, we need you to form a mercenary guild and recruit a ragtag team of heroes capable of piloting a tactically diverse range of high-tech mecha.

This is FUSION GUARDS: a new breed of competitive strategy role playing game set in a dynamic, sci-fi near-future. Vye for power with rival factions of mercs and PMCs. Craft, develop and equip the most powerful and advanced weaponry in order to strategically defeat your enemy on the battlefield. Grow your power and roster through story missions, weekly and live events, team and guild battles. Rapidly experiment with your formation, unit builds and pilots in order to test your strategies and take the top spot on the leaderboard.

Have you got what it takes, pilot?

Fight tactical, asynchronous battles with other players using powerful mechs in beautifully illustrated, 3D battlegrounds to become the strongest pilot on your server.

Rapidly strategise and customise. Victory will require ingenious combos of your mechs, pilots and equipment – all of which can be easily and quickly swapped around – to create the best units. Then, plan your formation and destroy the menacing machines and cunning setups of your opponents.

Evolving lore and story that will be shaped by the players, full of contemporary issues such as the AI explosion, robotics, mega-corporations and ruthless geo-politics. Each pilot is full of their own personality, backstory and motivations.

Players help shape the world by taking part in unique events involving an entire server. Win the event, reap the rewards and then become a boss battle available to all other players.

Join or create your own team and recruit other players as allies in the toughest battles – against rival teams and special events. Coordinate, recruit, and dominate.

Think even bigger and join a faction to participate in multi-battle events, story arcs and hundreds of players all working towards a common goal.

Work with the rewards and materials you receive in order to craft new tactical options and more powerful gear with an intuitive yet flexible and powerful system.

Enjoy the game at your own pace. No energy system; skip/auto battle (or watch carefully to analyse your choices), idle missions, and asynchronous PvP.

Epic, immersive soundtrack and audio design that brings you closer to the action and evolves along with your units power.
• No more player account wipes
• The first full questline is available
• Updated equipment view: This is the first iteration of a new design for the equipment view.
• Updated tutorial: Shorter and clearer, to get new players into the game faster
• NEW FEATURE: Loot limits:
• These are limited to 25 per day right now
• UI changes are coming with future updates
• Updates Dailies
• Nerfed the first challenge boss
• Changed salary timer to 1 hour and unlocked all 8 clips