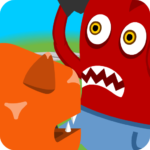 There have been many years of drought in banana plantations of Appleburg. Their lands are dry and no life prospers in them.

The hunger became desperation and the desperation madness. From chaos and madness, some apples, transmuted by evil onto Monster apples, emerged, the Quasimodos.

Monster Apples led their armies in a successful invasion of Foxtown, seizing their fertile fields in order to found an empire of apple plantations.

Now they are at the gates of the city. Guide the Foxtown forces in their defense against Monster Apples, and take each Monster Apple camp.

Make wise use of upgrades and powerups through 68 levels with increasing difficulty, to plan your winning strategy again Monster Apple invasion.