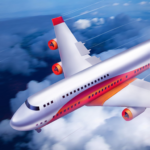 Do you like to become an airplane flight pilot? Would you like to fly planes in the skies? Flight Pilot 3D is one of the best plane flight simulator where you can train yourself from a rookie pilot to experienced captain by going through a series of lucid real flight lessons.

A very fun and exciting plane simulator which lets you start your career as a rookie plane pilot with a light aircraft a city flying school. You will learn the basics of airplane flight mundane tasks like takeoff, navigation, flying airplane in the sky and plane landing. Once you are done with the basics you will perform aerobatics and stunts to show off your skills. The detailed environments embellish the experience with beautiful scenery.