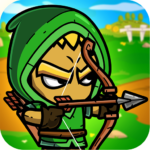 Five heroes is a turn-based indie game inspired by the amazing series: heroes of might and magic.

The land needs you. Evil skeletons are upon us and our great heroes don’t know what to do without an experienced commander such as yourself.

Recruit the heroes, upgrade their abilities, explore the land and choose which enemies to engage with. Complete all the quests and defeat the evil and powerful skeleton king.

When you are ready, head on to the Arena of Heroes to battle your friends’ heroes and see who has the strongest party!

—-
Made with tons of love by Banditos.
A quick bug-fix version with stability improvements and also…
Heroes defending your mines will now gain XP for each battle.
Cool new background music for the Haunted Woods.
The female Paladin now has a female death sound (whops! 🙂 )

(New) Collect The Most Flowers With Prencess 1.2