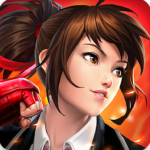 NOTICE: This is an online game that requires network connection

Jump into the classic Arcade mode, and ignite your fighting passion like never before

By 2050, scientific advancement allowed humanity to fuse the powerful P-Core – The Primal Core of Ancient Champions – with the human body; a fatal experiment giving birth to a new Hybrid super-class. The powerful Hybrids revolted against the human majority, resulting in chaos around the world. Now humanity is faced with a new era of global terrorism. Luckily, we have YOU to lead the Soul Fighters – a squad formed by human elites. With valor and power, Soul Fighters have been fighting against Hybrids to save the world, and uncover the truth behind the Hybrid conspiracy along the way…

• Classic Arcade Gameplay
Relive the nostalgia of classic arcade fighters in the palm of your hand; no longer restrained to the TV set! Square off against opponents on the move, and perform finger gymnastics to pull off epic moves and combos!

• Stunning Console-level Graphics
Immerse yourself in a surreal world and exceed the limits of your imagination. With cinematic detail and thrilling audio-visual effects – Step into a rich and detailed world, and see if you have what it takes to survive in the ultimate fighting arena.

• Real-Time, Fair and Square
No more delays and no unfair advantage! Challenge your rivals to a real-time 1-on-1 punch-up, or team up with your friends in 3V3 mode – Your skill makes all the difference in the arena!

• Assemble a Mighty Roster of Champions
Futuristic Soldiers, Yo-yo Girls, Sports Stars, Cyborg Warriors and Rappers…Pick and choose from a diverse world of Champions to express your creativity, and assemble a fierce roster like no-one else.

1) New Champ – Baya
Agile Movement and Powerful Transformation
2) Max Player Lv: 69
3) Base Battle of Guilds
4) Use all Champs for free at Battlefield (April 11th to April 14th)
5) Fix the problem that Dharma cannot be recruited.