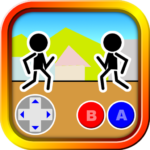 1,000,000+ downloads!! Mokken is super popular.
– this is a very easy and simple fighting game thought.
– PvP (Player versus Player）mode is very exciting!!
– By strengthening and RPG element,this is highly addictive!
This is the best free game for killing time!!
This game is not for just nerds.

Although this game is simple, it’s complicated. Here is the tips.

It’s very easy.
Both kids and adults can enjoy this game together! This is a Family game.

This game is a Battle Tournament style!

When your life is 0, the game is over.

How many opponents can you beat?

■ Level up your character

Earn coins and strengthen your character:

The highest level is 99.

■ How to earn coins

How to earn coins is as below:

Beat your opponents with a few tries as possible.

Don’t use too much special moves to defeat your opponents. Use Punches and kicks instead!

A secret fighter sometimes appears from the left and right of the level-up screen (if you are lucky. hee hee)

Tap him to get small coins.

Pressing button A and button B at the same tim is special move.

NOTE: this game is designed only for killing your time in awesome way. Here is the tip for you. The Special move is not what you expect. It’s quite lame. Be careful!

So, basically, it’s better to defeat your opponent with punch and kick! Yay!

This game is a fighting game. The key is defeating the opponent as quickly as possible.

This is a button mashing game.

But Don’t be a Button Masher!

The thing is that it would be too late if you mash A button and B button separately.

The best way is to swipe A button and B button quickly and repeatedly.

You can punch and kick with incredible speed.

This fighting match is extremely simple and fun.
You can enjoy it with your friends and family!

PvP mode (Sekken) has the following three ways to play.

– You vs. The computer

A winner is who wins twice straight first.

There are 2 sets of A,B button. It’s really simple and you can enjoy with friends and Family.

You can play this online game with other players anywhere in this world as long as you are connected through Sekken.

We don’t use computer players. They are real opponents, controlled by real players.
So you can’t play if no one was playing at the same time…

Change your player name when you are online to appeal other players!

Become a master player with many winning fights! Your win records will appear next to your name.

Better to use the same player’s name on the ranking page.

– Characters don’t level up.
– It means that you and other players are in the same level.

The timing of punch and kick is the key.

– Press the A button to punch and jump forward.
– Press the B button to kick and turn a back somersault.
– Punch and Kick are the same attack power.

Keep the tips in mind and enjoy playing.

Practice with a fighter of computer’s choice in Single Player mode first.

Fighting game “Mokken” is free. Show me some love.

Thank you for playing.

I wonder how many apps I have released before this.
This is a perfect app to kill time.