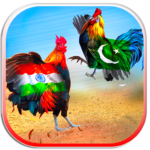 ? PLAY THE ROOSTER WRESTLING TOURNAMENT
You’re the best player and playing this rooster fighting game with your best and top trained fighter rooster of your country. You need to choose you country in this game and play as trained angry chicks with the enemy’s rooster and beat in the fighting ring. You need to play different qualifying rounds to win this fight between roosters.

HELP ROOSTR TO WIN FIGHT
In this roosters’ ring fighting game prove yourself as a best of player of the game farm rooster fighting and help your trained country rooster to the fight against the enemy’s angry rooster. Test your attacking skills on enemy fighting rooster and you should beat the enemies’ Gallo in this cock fighter game. There is a tournament of rooster fighting in a village farm. You have best rooster to fight with the other countries roaster. The hero rooster is fully animated have jump and attack animation to beat the other roosters. Many people are there to see the performance of your Gallo fight.

WARNING
Please note this game is for fun and simulation purpose for our users, we are strongly against the Animals cruelty & unkindness