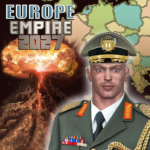 The year is 2027 and the world is in chaos.
The United States’ newly-elected president decides to focus on home affairs after promising in his campaign that American soldiers won’t be sent to foreign wars anymore.
The United States starts pulling back its forces from around the world.

World markets collapse after a major wars start in the Middle East and South China Sea with concerns of supremacy and unequal sharing of resources.
Europe is left alone to deal with huge floods of refugees and the threat of a big invasion from the east.
The trouble continues for Europe when nationalism raises its ugly head in Austria, Turkey and Russia. NATO is no longer relevant.
Conflict spreads worldwide and a few generals in Europe begin coups to seize power.

As the leader of the rebels you were chosen to be the head of your country! Based on real data, the game is designed to think of thousand of possible scenarios. Use diplomacy or declare a war. Its all up to you!

In the game, you select the country you wish to lead and start to play.

Follow us on twitter: https://twitter.com/iGindis
Find us on Facebook: https://www.facebook.com/IGindis-Games-Community-1537213786605789/
Join our big community: https://plus.google.com/communities/111682768401571055484
See our video at: https://www.youtube.com/channel/UC2_-8Psq33Hw1y14hhWog2Q
* Improved game speed and visibility.
* Fixed bugs and continue to improved the Artificial intelligence.

We plan to improve a lot the game and for this we need our players support.
Our plan is to add improvements like new zones (Africa, America, ancient time, fantasy and space), United Nations, multiplayer…
Your support important to us to continue developing.
Thank you 🙂