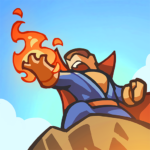 Are you a fan of tower defense and real-time strategy games? If so, Empire Warriors TD: Kingdom War is the RPG defense game that you’ve always been finding. Play now, FOR FREE!

GAME FEATURE:
• 9 powerful heroes with unique abilities.
• More than 30 types of enemies are waiting for you.
• Enjoy a lot of epic wars in different fantasy environment: the plain of human, dense forests of elves, the mountain kingdom of dwarves, frozen mountain and more!
• 4 awesome specialized towers, each with 4 powerful upgrades to customize your strategy.
• 5 strong power-ups to aid you: Armageddon, Blizzard, Blessing of Nature, Guardian of Kingdom, Magical Landmine
• Focus on strategy and command your warriors with superior tower defenses.
• Rank yourself top one on the leaderboard of competitive tournaments.

▶ Fantasy Story
This tower defense game is set on a fantasy continent that many races live together on this continent, including human, elves, dwarves, orc… and many other legends creatures. Each land you come, each battle you join, each castle you build has a history behind it. Do you wonder what the story is? Will you have enough courage to take into this greatest empire with lots of weapons, magic things and so on? Join and find out now!!!

▶ Endless Action Tactical RPG
Control mighty hero to be an empire defender and defend your kingdom. Each hero has an active ability and 3 passive abilities. By upgrading heroes, their strength will increase greatly.

▶ Enhanced and Varied Gameplay
Various modes of gameplay in one tower defense game from easiest to hardest, besides the campaign missions, the player also can enjoy the infinite challenges in endless mode. Not only that, offline option combines with online will bring to you the great experience.

▶ Formidable TD Challenges
There is a variety of monster with an infinite rush in the tower defense game. Each monster has a unique appearance and some even have abilities that may cause a lot of trouble to every tactician.

Get ready to fight in the best strategy TD game.
No fear of death! Be a wise leader and join now for free!