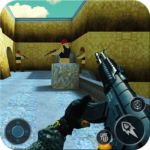 One man army is a big title for you and you have to prove that title by showing all elite army commando skills for survival in a war. Act as a secret army commando and elite commando save your people from enemy attacks and kill them before they hunt you down. Fire bullets as many you want to fire from your sniper guns and machine guns. Shoot your enemies with your sniper gun from safe place by using professional sniper shooter. Play with accuracy and moderately in this army sniper shooting action game.
Elite commando survival: war shooting game has 5 levels with different difficulties and to win this game clear all these missions. These missions include arena23, The Hunt, karcho, Aftermath and Destroy City. All these missions have different difficulties with different number of terrorists and all these terrorists are well trained and equipped. Elite commando survival: war shooting game offers high quality graphics for best gaming experience.