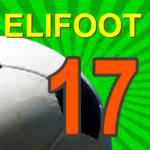 Elifoot is a famous, classic style Manager Game.
It is considered by many one of the most addictive games ever, because of its simplicity and its challenging entertainment capabilities.

Each player plays the role of president and coach of a club, buy and sell players, manages the finances and selects players for each match.

The teams are divided into divisions, each season has competitions in the league, domestic cup and international cup.

The free version has the following limitations: