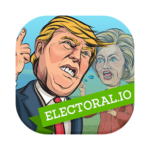 If you are really into politics and you also like games, you can now play a super presidential election game. Is it going to be a nice little election game or a massive collision between the two major fractions? Running for the presidency isn’t easy! However this elections game is quite fun to play.
Wanna relive one of the biggest events in the US media? Which side do you want to take? Even though the confrontation between Donald Trump and Hillary Clinton is over, you are given a chance to rewrite its scenario any way you like. It’s up to you to decide which side will emerge victorious! Join one of the two parties and play online with people from all around the world. Develop political force for you and your party to destroy your opponents and win the past elections of 2016!
You can manage your very own presidential campaign and grow by strategically raising funds, impressing the crowd, reaching important investor meetings, polling and collecting votes and likes, launching media campaigns and much more. Or you can get even better results by consuming the opposing party’s players. If there is one particular presidential election candidate you don’t like, now you have the change to literally crush him or her.
But be aware of bigger opponents and things like protests, dislikes and damaging evidence – you will either be eaten or weakened. So remember to keep your allies close!
Who’s gonna win this battle? Donald Trump or Hillary Clinton? Prepare to challenge your agility, cunning and strategy to lead your party to the first place in rankings to become the greatest political force in the USA.
Now it is up to you to sequence events in history. Prepare to realize that political games can be surprisingly addictive. Download (it’s free!) and enter to win!
– Optimized text size on smaller screens
– Fixed smooth damp moving for the camera
– Other minor bugs fixes