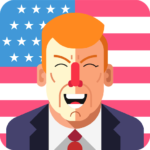 Want to become the next President of USA?

You can make the Republicans take over the White House or keep the Democratic Party in power for another 4 years.

Take a stand on current issues, win support from various factions like Public, Media, Business etc., debate other candidates and run for presidency in this casual politics simulation game.

Will you support gun control, immigration or stand against? Will you play dirty and run negative ads against your opponents? Will you stick to your views and lose or compromise with your ideals to become the President?

Gameplay:
– Play as 1 of 12 candidates. Candidates include Donald Trump, Hillary Clinton, Bernie Sanders etc.
– Take a stand on important issues facing the country today
– Debate against other Presidential Candidates.
– Politics game where you have to survive in the election race for as long as possible

Remember, every decision counts. Be part of a political revolution. There is a thin wall between getting extremely popular and your campaign completely crashing. Get support from all factions, improve your Poll Rating, Punch your way through your opponents and become victorious on ELECTION DAY.

Carve your name in the history of USA!
Minor Bug fixes