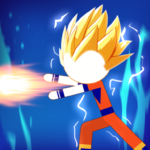 Welcome to our real Action RPG! The best battle experience is here!
“Dragon Z Attack – Kung Fu PVP Action Platformer” is the most addictive action platformer fighting game in 2020.
This fighting game will give you a chance to become one of dbz heroes to fight z with enemies and protect everybody on earth.
You can experience the rich DBZ plot, the refreshing fighting and there is also a clever level design!
If you are tired of operation, you could let your heroes PK online, All you have to do is watch them win.
Enter the Super Dragon Brawl tournament, assemble the ultimate team, and fight your way to the top!
You are the one with the strength to succeed!

[How To Play]
GREAT adventure: Run, jump, fight, solve puzzles and use Turtle pie Qigong to defeat your dragon enemies or HUGE Bosses in the platform game.
USE your wisdom to unlock obstacles on the road and rush to the end of victory.
FIND the WEAK SPOT OF EVERY BOSS and vanquish them!
CREATE the strongest equipment with rich props.
COLLECT amazing equipment and weapons to upgrade.
FORM your dbz heroes and battle for victory.
UPGRADE all your heroes, then challenge your skills against other players with 1-on-1 Versus fights and epic 3-on-3 brawls. Climb the rankings against players from across the world!
THE HIGHER your rank, the more amazing your rewards!

This 2D adventure action game will give you a chance both to brandish a stick and put your brain to good use. Not only will you have to fight for dear life — you will need to solve entertaining puzzles to stay alive!
You will encounter interesting quests, and it will take all your wits to get to the next level. Don’t forget to grind your heroes to be stronger and tougher!

[Features]
– RICH storyline, a lot of side missions.
– RELIVE the anime action in fun RPG Story Events!
– THE PLATFORMER’s stages are filled with obstacles and VARIOUS TRAPS which fly, spin, shoot and strike in every possible way.
– POWERFUL equipment and upgrade system.
– SIMPLE operation, refreshing blow.
– GRIND SKILLS by defeating treacherous enemies. Experience is invaluable and will make you a great and a skilled ssj warrior!
– FIGHT UNUSUAL and dangerous enemies — a VARIETY of monsters and even devices.
– AWESOME graphics, fascinating HD effect.
– SOLVE PUZZLES to find hidden props.
– EXPLORE the platformer levels and search SECRET AREAS to pick up magic Box. Potions what is in magic Box will help you to become even stronger!
– 60+ MAPS in story mode that help you collect dbz fighter heroes more quickly.
– COLLECT these kinds of super dragon hero fighters: ssj2, ssj3, ssj4…
– PUT 3 your best heroes to do battle in the Arena. Watch them PK online in a multiplayer contest for glory! Climb the Leaderboard for the best rewards!
– EARN rare characters to dominate the competition and build a winning Super Brawl team!
– COMBINE your favorite characters to make the ultimate dream team! Will it be veta, BuO, and one of the ssj? Or will it be Buma, Lin, and Olong? You decide!
– NEW characters are added to the universe all the time.