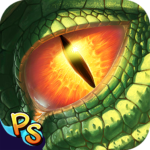 In a Magical, far away Realm, Seven Kingdoms lived in harmony….
Until one day… When the sky rained fire.
Its time for legendary heroes to rise once again!

Collect the best cards and grow an epic army to battle your enemies for thrones. Become the best dragons, werewolves, vampires and other amazing monsters summoner! Upgrade, level up and evolve your cards to get the best from your heroes. Gather all the Gods from all popular mythologies, and force them to fight for you in your journey.

Play with your friends using our multiplayer features and use their powers and skills as allies!

Join us in an epic adventure, chose your Hero and start building your own team.
Earn Coins and Diamonds, Defeat enemies and powerful bosses.

Capture Monsters and Dragons and recruit them in your own team.

This will be the quest for Peace, the place where Myths and Legends meet and History waits to be written.

Will you fulfill the Legendary prophecies and become a Dragon Tamer and Bringer of Peace in the Realm?