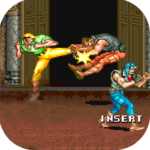 In the game, the direction is controlled by up, down, left and right, and there are attack keys (A key) and jump key (B key).

Ordinary attack: Press A to attack the enemy and double-click to achieve a combo.

Running: Before and after (holding in front and holding) is running (you can use the up and down direction to control the direction).

Running Attack: Press A in the running.

Jump attack: Press A when jumping.

Swing attack: Press the AB button at the same time. Shooting enemies within a certain range and having a high chance to make the enemies being stunned after getting up, but will consume about 10% of the blood.

Fit: Two or more standing together, three of them will be thrown out after three seconds, everyone has a few seconds invincible state.

Invite your facebook and google+ friends to challenge together!