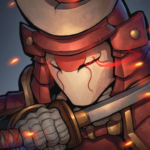 Prepare for an RPG with a complete story. Find out what has corrupted the world with interesting plot twists, explore the Japanese region hit by the Yokais and find the cursed edge in Demon Blade. In a pure action game.

Share your experiences with your Clan and compete with everyone to reach the highest divisions and be the most powerful Samurai in the region.

⛩️ Action combat developed exclusively for mobile devices:
?Forget about buttons on the screen.
?Based on a deep combat mechanics.
?The “timing” of the blocks is fundamental to perform the special ability: “Fullcounter”

? Thousands of equipment combinations:
?A system of random generation of states allows the creation of infinite equipments.
?Eight different attributes that create new strategies.
?Manage your resources to improve and fuse your equipment.
?Your equipment is always shown ingame, change it and you’ll have a new look.

⛩️ In Demon Blade there is a story like those in the great old RPG.
?A deep story with a start and a surprising ending.
?Relationships between the characters and your hero.
?Live the adventure of a magnificent Samurai.

?A game always in expansion.
?Multitude of events for each day of the week.
?Constant updates with new armors and enemies.
? A community that keeps growing in Demon Blade.

?Exploration in the highest Rogue-Like style
? Random generation of dungeons like the Role Playing Games PC games.
? Penalty system.
? Exponential rewards based on your progress.

Ranking and divisions. PvE
? A system of divisions where the most powerful have a reward.
? Free chests for the best fighters.
?Will you become one of the Demon Gods?

? PvP System
? Challenge everyone to advance positions in the Dojo.
? Receives prizes for ranking up.

Clan of Samurais. PvE and PvP
? Create and join Clans.
? Chat with your clanmates.
?Join the Raid with your companions and defeat formidable enemies. (Coming soon)

The path of the sword is in Demon Blade.

Become the legendary RONIN in DEMON BLADE.
? Note: This game requires an internet connection to play.