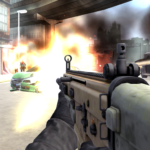 A zombie horror shooter (FPS) game in which you battle zombies.

Recruit squad members(NPC) who will battle on their own, and experience the battle with the zombies using various weapons.

Year 20xx, an unknown disease breaks out all over the world and people starts to turn into zombies.
Soon, the whole world became a place unsuitable for humans because of zombies.
A very few people who are immune to the virus gather in one city and struggles to survive.
You must purchase weapons and gather squad members to battle the undead zombies in order to save the city.

– A realistic sense of hitting the target

– You can enjoy the game in 33 various combat environments.

– 15 realistic guns (rifles, machine gun, shotguns, grenade launcher, submachine guns, handguns, minigun, RPG) give off an accurate sensation of using the real thing with their firing rate and such.

– You can add up to 6 squad members(NPC) to your team, who will carry out combats on their own.

– You can assign the desired weapon for each squad member.

– It can be easily enjoyed with easy and intuitive controls.

– A variety of zombies with natural movements.

– The game atmosphere of apocalypse