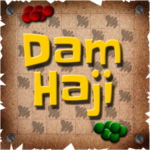 Dam Haji is a two-player traditional board game and one of the Checkers/Draughts variations. The promoted piece is known as “Haji” in this game (hence the name of the game).

The objective is similar to the standard Checkers/Draughts i.e., to capture all opponent’s pieces or to force the opponent to have no more legal moves. Three modes are provided; the Standard mode (Dam Haji), Giveaway mode (Dam Suap) and Kapit mode (Dam Kapit). It can be played either using 8×8 (24 pieces), 10×10 (40 pieces) or 12×12 (30 pieces) board sizes. The rules can be set to suit your game play before starting any match. The game offers you to play either against Android (CPU) or with a friend using a same device.

The default game rules are as follows:

Note: Greedy Jump rule is only available in v2.0 and later.

Thanks & Enjoy the Game !