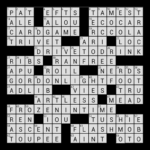 FACT: 2013 is the 100th anniversary of the crossword puzzle. On December 21, 1913, Arthur Wynne, a journalist from Liverpool, England, published a “word-cross” puzzle in the New York World that embodied most of the features of the genre as we know it. This puzzle is frequently cited as the first crossword puzzle, and Wynne as the inventor. Later, the name of the puzzle was changed to “crossword”

THIS APP IS AD FREE, CONTAINS NO VIRUSES, NO MALWARE, NO SPYWARE, AND NO ADVERTISMENTS OF ANY KIND!

NOTE: Some crossword puzzle sources may not release updates on a regular basis and the developer does not control content delivery from the puzzle sources.

In 1944, Allied security officers were disturbed by the appearance, in a series of crosswords in The Daily Telegraph, of words that were secret code names for military operations planned as part of Operation Overlord. “Utah” (the code name for one of the landing sites) appeared in a puzzle on May 2, 1944. Subsequent puzzles included the landing site “Omaha” and “Mulberry”; the secret artificial harbours.

On June 2, four days before the invasion, the puzzle included both “Neptune” (the naval operations plan) and “Overlord”. The author of the puzzles, a schoolteacher named Leonard Dawe, was interviewed. The investigators concluded that the appearance of the words was not an attempt to pass messages. According to a former crossword editor of The Daily Telegraph, in 1984 a former student of Dawe’s claimed that he had picked up the words from soldiers’ conversations around the army camps, and included them when helping Dawe to choose words to fill crossword grids. Some cryptologists for Bletchley Park were selected after doing well in a crossword-solving competition.

This APP is Open Source under the GNU License Version 3.0, license and source code are available at our website: http://www.androidputing.com