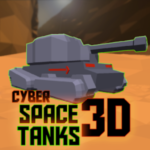 Cyberspace Tanks 3D is a tank arena shooting game set in a low-poly universe.
Fight for objectives in real-time 3D battles against Tanks and Hover-Tanks.

Features:
* Works completely offline, so no queues and no lag issues, just fire it up and play!
* Small download and no extra files needed.
* More than 20 vehicles to unlock, including Tanks and Hover-Tanks, each one with their own stats (armor, speed, damage, reload time…).
* 3 game modes to play.
* Activate modifiers on your tanks to shoot powerful lasers or be indestructible for a few seconds.

Note: this is a slightly modified re-release of an old game i made back in 2015, with no ads or IAP this time, enjoy.
support for 64 bit devices