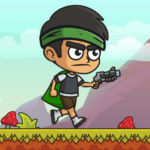 Crazy Runner Escape Game is an amazing addition in your daily addictive games, where you run, jump ‎and root enemies in your path. You can win the game by running to collect coins as coins collector. Run ‎and shoot as fast as you can, Dodge the obstacles coming your way. Fight against enemies without ‎touching obstacles. Avoid different kinds of obstacles by jumping and sliding while running through the ‎beautiful jungle and snow, Hit and kick them with firing gun which is hold by your crazy runner to clear ‎its path and win the game. Crazy escape runner has all the great features to make you addicted and ‎entertain for hours. This coins collector game is very easy and simple to play but difficult to master. You ‎will learn it easy that how to run and jump, run and shoot with hero but sometimes it becomes really ‎hard to run, fight and avoid obstacles at the same time.‎

Crazy Runner Escape Game is a surfers run where you have to run as fast as you can. Crazy Runner ‎Escape an amazing jungle running game for run and fight lovers in the coins world. Run along the chaos ‎complex obstacles and escape from the enemies in your way. You have to dodge obstacles to pick ‎coins. Play and try all the available tricks to make your hero boy awesome and collect coins. There are ‎also a lot of power ups to make it easy to clear a large area. Fly in the air and fight again with monsters ‎in your way. Shoot and run like a hero and clear the level to unlock more. Upgrade to get power ups to ‎get some sick scores and unlock extreme characters. Take some serious air time in next levels and ‎enjoy. ‎

This shoot, run and jump game excites you to move on like a crazy hero who is very keen to complete ‎the challenge. Tap to jump and shoot at the monsters which are in your way. Go as far as possible ‎without falling down and avoiding enemies to clear stages of this running game. Jump over these ‎obstacles and Collect coins as much as you can and enjoy the endless hero jumping and shooting ‎game. Beat them and go to the final place to win the game. ‎

Download this crazy run to escape & collect coins game and enjoy in your free time. There is nothing ‎difficult, and anyone can play easily. If you like crazy runner escape game then must share with your ‎friends and family. If you have any feedback to improve it then must let us know your feedback as we ‎want it to the benchmark in the running games. ‎