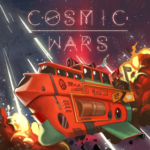 The end of the universe is near, travel for survival in ‘Cosmic Wars: The Galactic Battle’. Cosmic Wars is a casual space-strategy RPG with PvP! You must build your ship, battle against players, take on quests, and loot your enemies – or even your friends!

Inspired by Cowboy Bebop and the space-western genre, Cosmic Wars pulls you into a post-apocalyptic universe as a Bounty Hunter wandering the ends of the galaxies. In a storyline filled with sarcasm, satire, and questionable characters, you can only rely on the power of your ship (and maybe your crew?) in order to survive.

Game Features:
▶Immersive Storyline: Travel through the post-apocalyptic world of ‘Cosmic Wars’ with stunning artwork, wondrous stories, quirky characters, and a fantastic soundtrack.
▶Build Mechanics: Gather resources to create various parts for your ship! Build your own strategic fleet and lead the battle to your advantage with skills and interceptors.
▶Customization & Upgrades: Combine your favorite ship parts however you want and level them up to become a Servant of Death!
▶Strategic Gameplay: Battle against players, space monsters, and other various forces who wander through the universe!
▶Quests: Hundreds of quests in the main storyline, side quests, event quests, seasonal quests and more!
▶Master League: Collect medals through PvP battles and rank up! Compete against players all around the world.
▶Daily Mission Bounties: Collect Bounties and get rewarded!
▶World Chat: In-game chat system makes communication with friends and players easy!
▶Frequent Updates: We work to consistently give you new content, features, missions, and events!

So long Space Cowboy, will you survive?