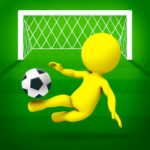 Soccer for everyone! Show off your best kicks in Cool Goal, the action-packed football game that always hits the back of the net! Your task? Shoot and score! Dodge countless enemy players, curve your ball like a football superstar, and nail a perfect goal! Explore near-endless free football games in Cool Goal now!

To play, you need to define the angle of your soccer strike and ensure that you time it perfectly so that you don’t hit any obstacles or opposing players. Sound simple? Think again! Enemy players are going to pull all kinds of crazy tricks! You’re going to need lightning-fast reactions, logic skills, and serious football knowhow to come out on top of each penalty shootout.

You’ll be able to hit the ball with ease, as you master the perfect soccer kick and turn the keeper’s goal games around. You’ll find it so simple you’ll never want to play football any other way. Before you know it, you’ll be able to score goals under any amount of pressure and even shoot a ball of fire so hard that nothing will be able to stop it! You’re the striker, and nobody will get in your way as you kick balls and take names in awesome Cool Goal games.

As you progress through each level, you’ll collect gold coins and keys which you’ll use to unlock new skins and football heroes. With so much to explore compared to other free soccer games, you won’t be running out of fresh soccer content any time soon.

Get new skins for your soccer ball, and dress like the stars so that when you land the ultimate soccer strike, you land it in style. Once you’ve unlocked three keys, you can choose to use them to open reward caches for even more soccer goodies. The more you put into Cool Goal, the more you’ll get out of this jam-packed ball game that will send you across the world as you kick balls from beaches to snowcapped peaks!

If you love soccer and you’ve been on a football strike, this will bring you back to the beautiful game because this is more than ‘just’ football, this is more than your average soccer game, this is Cool Goal! Get ready to face a variety of football shootout challenges across thousands of levels that present different styles of penalty shots, ball games, and the occasional free kick.

So, have you got what it takes to land crazy soccer kicks and shoot balls across the world? Put on your soccer kicks because there’s only one way to find out, it’s Cool Goal time! Use your brain as well as your boot as you dodge obstacles to land the penalty kick of a lifetime.

Say goodbye to boring free soccer games and say hello to a whole world of entirely free ball games. Experience the joy of sport like never before, because this penalty shootout isn’t like any other football game. Cool Goal is the soccer shootout of your dreams!
BOO! We’re kicking off with a stunning HALLOWEEN LOCATION, NEW MISSIONS and UNIQUE REWARDS for completing them. Also we’re tightening things up with a bunch of bug fixes and improvements to ensure Cool Goal stays just as cool.

Be A Legend: Soccer