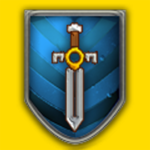 This is a time of battles, alliances, and spies…it is a time of Conquest! Using your army you seek to conquer other Lords who, like you, are seeking their fortune through battle. Strengthen your army through alliances with others, spy on those you wish to attack, enlist stronger troop types to hold your newly acquired land, and build destructive weapons of war to siege mighty Castles.

Will you choose the path of Magic as a Mage, bending the elements to your will with powerful spells and summoning fantastical creatures to smite your enemies? Or the path of Righteousness as a Cleric, purging the unholy from the battlefield and excommunicating the faithless? Perhaps you will choose the path of Nature as a Ranger, where beasts of the forest will answer your call to arms while nature herself shields your army from view. Some heed the Barbarian’s path of Lawlessness, raiding cities and kingdoms alike with utter contempt for the honor of others.

Join Conquest! now and see if you can become the ultimate King!

• Play with or against others in real time
• Choose your path from 6 playable classes: Fighter, Barbarian, Mage, Cleric, Ranger, Vampire
• Gain access to more powerful abilities and skills, including 30+ spells, as you advance in level
• Play across a large world with 3 Continents and 25+ Cities
• Build a navy to conquer the seas with 8 ship designs
• Enhance your kingdoms by obtaining loot or artifacts or hiring a hero
• Track your progress across the Ages with 50 badges
• Build your army using 45+ troop types, including Gladiators, Cataphracts, Golems, Fanatics, Centaurs, and Nosferatu

Can you build an economy, raise an army, and be the first to conquer the Age? Join now!

Conquest! began in 1993 as a text based game on IRC (#Conquest on efnet). Visit conquestgamesite.com/history to read about the history of the game.
Like what you see? Leave feedback or a rating to let us know!

Have a suggestion or need help? Contact the Emperor: emperor@conquestgamesite.com

2018 The God of Highschool with NAVER WEBTOON