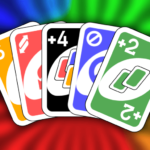 Play the classic uno game that you love with this tiny app that consumes very little memory.

Uno is an American shedding-type cards game that is played with a specially printed deck. The general principles of the gameplay put it into the Crazy Eights family of card games.

The official rules for the classic uno game are:
To win a match you must be the first player to get rid of all your cards. Players play in turn: either take a card from the pile or place one on the table if it matches the last card placed on top. Other moves are not allowed.
Two cards are considered matching if they have the same color, same number or same symbol. There are 108 in the deck: normal ones with numbers 0 to 9 for each color(red, yellow, green blue) and special action cards:
– Skip: next player in sequence misses a turn
– Reverse card: order of play switches directions (clockwise to counterclockwise, or vice versa)
– Draw Two (+2): next player in sequence draws two cards and misses a turn
– Wild card: player determines the next color to be matched (may be used on any turn even if the player has matching color)
– Wild Draw Four(+4 and wild): player determines next color to be matched; next player in sequence draws four cards and misses a turn; caution: may be legally played only if the player has no cards of the current color

Some people play a variation of the uno game where they add or modify some of the uno classic rules, but this app only uses the original gameplay. This makes it fun for all because everybody knows the same rules.
– less ads