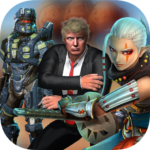 Beat ’em ups are games which pit a fighter or group of fighters against many underpowered enemies. Gameplay usually spans many levels, with most levels ending in an enemy boss. If multiple players are involved, players generally fight cooperatively. Here you play as Trump and he need to fight and save the city from civil disobedience .Break Objects and collect Swords, Sticks and guns for easy killing.This game has 4 different chapters and has more than 30 levels. Its a 3d fighting game visualised in high quality 3d fight animations, level designs and theme.