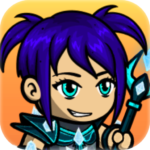 Chibi Combat is a free Multiplayer RPG PVP arena style mobile game app that you can play casually (or not) while growing your character to become the best hero in the game!

Make your way through dangerous stages, avoid deadly traps and obstacles and fight unique bosses at the end of each stage!

You can fight against other players, do a bunch of map levels and dress up your character accordingly to your level. Fighter, Mage or Archer, whatever you may choose, there is never a dull moment or a too easy opponent.
Better yet, why don’t you test out your skills and see for yourself?

CREATE AND CUSTOMIZE YOUR CHARACTER. Fully customize your character’s appearance and outfit to match your play style.

LEVEL UP by completing maps and defeating stage bosses and other players in the PVP Arena!

OBTAIN GEAR either by opening chests or crafting various armors and weapons of your choosing!

LEARN MAGIC SPELLS AND FIGHTING SKILLS. Choose how you want your character to fight by learning spells that match your play style. Fighter, Archer, Mage, Defensive or any combination, it’s up to you!

COMPETE IN THE PVP ARENA WITH OTHER PLAYERS. Prove yourself by battling other players for loot and prizes. But be careful, other players can attack you as well!

ENTER THE CRUSADE. Test how long you can survive in the arena by fighting other players one after the other and win epic rewards!