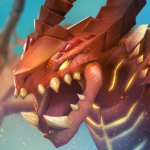 Now, you, Chosen one, is arising at an era of CHAOS OF MAGIC, which is an era produces a host of heroes and heroines. Stand on the chaos field by creating the greatest castle ever! Associate with heroes who are righteous Knights of the Round Table, powerful orcs, intelligent elves or even evil devil from the abyss. Build up your soldiers, heroes, forge alliances, mighty dragon and fright for your own victory! Prepare yourself to fight through epic wars, set up legendary city and conquer your foe in this real-time strategy war – a mobile MMO game!

–Real-time Battle on Same Server
Explore and campaign with other player in this Open-world MMO. Cooperation, or confrontation? Choose whatever way you care to enjoy it. Help allies to fight back or lunch a sudden attack, as your wish, my lord.

–Make your own Tactics and Formations
Only a small change of troops will have a big effect on battlefield. Cavalry, archer, magician, branches can counter each other, which bring a large amount of tactics. Use them properly and set up an efficient formation to vanquish the enemy.

–Use the Power of Dragons
As a Chosen one, Dragon comes to help you to devour your enemies. Giant dragon contribute their unique power to the battlefield for you. Make good use of them, victory is within reach.

–Build your Mighty City
Rome was not built in a day. Make every effort to develop your own city and strengthen your power, collect resources, recruit army. These will help you to seek hegemony.

–Join Guild and Fight together
Build a guild with your friend, make efforts to create a Union City and fight together. Work together to defeat common enemies and unlock group achievements.

–RPG Heroes
Heroes never fight unprepared battles. Recruit and upgrade your heroes, arm them to teeth, make full use of their unique skills to clash the battle arena!