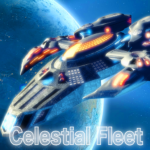 Celestial Fleet is a powerful tactics battle game directing the fleet as admiral of the Space Fleet!
It corresponds to online multiplayer · single play.
Organize the fleet with the acquired Space Battleship to build a formation.
A space fleet battle of innovative system combining real time and turn system will be unfolded.

[Features of Celestial Fleet]
Selection of play powers from two camps of different galactic empire and Galactic Federation respectively.
A grand space war will be set in the galaxy!
Various Space Battleships (Star Warships) appeared!
We will organize the fleet and build a formation to carry out a space fleet battle.
Battle is all reproduced with beautiful 3D graphics!

Despite the genre of strategy game (RTS) simulation game (SLG), the battle develops very quickly and crisply.
It is possible to play in one hand for neglect time etc commuting to work or commuting.
We can also respond to online matches and enjoy the world wide world war with world rivals.
Please win the galaxy’s champion as Commander (commander) by winning rivals all over the world on the front of the galaxy.
There is also a free of mission mode that can be captured by one person.
A large mobility fortress stiff enough to appear in the final mission (final mission for each level) also appears!

[About Appearance Space Battleship]
Hundreds of Space Battleships (Star Ship) appeared.
Based on a cruiser, the strategy / tactics range widely by separately using various ships and warships such as torpedo ships, large battleships, supply ship, etc.
It is possible to customize and nurture battleships in various ways, and there are also elements like role playing (RPG).

Many battleships have motifs of myths / legendary weapons, fighters, goddesses, heroes.
Futures and things that have motifs of real battleships such as Yamato (Yamato) are also scheduled to appear,
There are a variety of weapons and equipment such as beams, torpedoes and missiles.
Please organize your own strongest fleet (deck).

[Game Background]
The era of the Galaxy Senki (Galaxy Saga), which has been over a thousand years since the human race left the earth and entered space.
The galaxy had become an alternative era in which the Empire and the Commonweight divide.
Celestial Fleet is a game that depicts a single era of such a chronicle (chronicle) in the universe.

● Recommended for this type
· Simulation, strategy, war · game seems to be difficult without time but those who want to play SLG with the theme of the universe.
Celestial fleet can be played immediately and one mission will be over in a few minutes. You can play even during commuting time!
· Those who like shooting games such as the SF mechanism gigantic stage set in the universe · galaxy.
· Fans who set the stage in the near future, games that shoot with gun games and weapons like guns, military games etc.
· Those who like tanks (tanks), helicopters, armored weapons, fighter games etc.
· If you like games of robot and mechanical system.
· Battle ship Yamato, Navy Battle · Navy · Sengoku Game etc. who likes.

Basic game This is a game application you can enjoy free of charge.
Fixed problems with internet connection.
Improve graphics.
Bug fix.