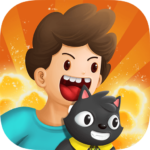 In “Cats & Cosplay: Tower Defense” an evil hoverboard riding Cat Clone 😾 has his eyes set on taking over your pixel kingdom.

With the help of a cat named (Sir Meows A Lot) you’ll build an army and fight to defend a rush of enemies.

A legendary clan of cats 🐈 (origins unknown) will help you wage war vs. alien creeps in this epic battle royale. This squad is comprised of four different defensive towers. Simply tap on a flag to build a fort, and double tap on it again to boost your defence during combat.

This offline castle clash offers gameplay akin to classic castle defence games. With action RPG style mechanics, more skill is required to win on the battlefield. Being idle for too long in your missions will send your 8-bit empire crashing down.

Rally the troops, equip your warriors, and man your battle stations!

Perfect your craft and survival strategy to strike down and conquer the invading force!

Plant explosive bombs on the road to kill walking enemies upon impact.

Watch in awe and marvel as you brawl against the final boss!

Need a little help in defending against the revolt?! Grab some free cat coins to buy cool swag, watch video averts to earn 2 extra hearts, or play in Easy Mode. We scaled down the games difficulty so gamers of all ages can play (kids, children, teens, boys, and girls).

So what are you waiting for? It’s adventure time! Put on a superhero costume, grab your evil granny cane, and prepare to defend the kingdom rush before it’s too late!

This grumpy cat clone’s vengeance and reign of terror won’t stop until he conquers new frontiers and rules the badlands 🌋of your pixel city!
Optimized game mechanics.

Idling to Rule the Gods