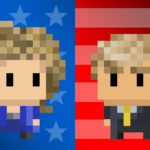 Trump Vs Clinton! It’s the political battle of the decade! Take on the role of a campaign manager working for the party of your choice.

(play a little to unlock Bernie, or Ted!)

• Intense tapping action as you try to win over the majority of the American voters!
• Stay up to date with the real-life action, as the candidates use real quotes pulled live from their Twitter feeds.
Cast your vote! See how you can impact the world, as your taps contribute to a global leaderboard. Check in at any time and see which players are putting the most energy into supporting!
• Get your point across! Have something to say? Tweet it to us @campaignclicker along with the candidate you want to talk about. If we re-tweet you, your words will appear inside the game for everyone to see!

Never before has an app blurred the lines between real political debate and the awesomeness of a videogame! Level up your campaign profile, discover secret characters and don’t stop collecting votes!

The future is in your fingers!

Permissions required:
– AccessCoarseLocation: This app requires access to you approximate location in order for our partners to serve relevant adverts for your region.
– ReadExternalStorage and WriteExternalStorage: Cache adverts in background for seamless viewing ads experience
– Added new Presidential debates!
– Removed various permission requests from the app.