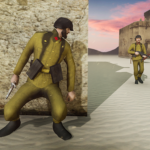 The city is ruined and occupied in a crazy war. Amry has called the brave warriors to win the world war. Are you in? Would you like to fight in this impossible world war of the army squad? This is the best offline WW2 Shooter game with role-playing strategies.

Play massive action fight to complete all the WWII army rescue mission. Aiming skills of the firing squad matter the most. The game is full of action, adventure and surprises. Download free “Call of Army WW2 Shooter – Frontline Duty Mission” new army shooting game which has the following key features:-

Excellent Graphics:
The environment and graphics are so well portrayed that you will feel the firing squad coming to you as in real. You can be sent to either city or deserts randomly.

Sounds and GamePlay:
Choose the best of the best weapons before the darkness prevails. Friendly game-play has been integrated with black ops of the warfare.