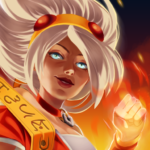 An incredible role playing adventure is waiting for you! Enter the world of Brave Soul Heroes – Idle Fantasy RPG and prepare to live an intense journey full of dark creatures, short quests, arena battles and epic treasures. Unlock heroes, create your party, improve their abilities and fight against orcs, wizards and big bosses! The destiny of these lands depends on you! Join the best idle RPG game and battle offline or online!

Some of your heroes have been kidnaped, and the reigns are receiving mysterious attacks from monsters and enemies. You are the only one capable to save them! Start a dangerous mission with other players and face the darkness in epic trials among different lands. Equip your heroes with magical swords, shields and rings, learn new skills and fight creatures in the arena. Enjoy the mightiest fantasy idle RPG game!

-Summon, collect, equip and train your heroes. Many skills to unlock!

-Tens of missions and special quests full of dark creatures!

-Many ways to play! Try to be strategic and wise!

-Your squad is waiting for you! Choose your heroes and go to the arena!

Brave Soul Heroes – Idle Fantasy RPG is an innovative role playing game with lots of fun and strategic battles. Summon new heroes, level up your characters, craft powerful weapons and equipment or buy them on markets, improve your abilities and face the strongest enemies! Train in the arena, evolve your squad and defeat all the bosses.

Download Brave Soul Heroes for free and start enjoying one of the greatest fantasy idle RPG!
We have fixed some little bugs and improved stability.

Thanks for playing Brave Soul Heroes!