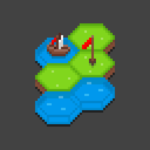 Boats & Banners is a turn-based strategy game with an 8-bit pixel art style, played on a map with hex-based tiles. Take part in an adventure and explore a new world! Establish colonies, build different kind of ships, produce new resources and battle with different players. Win the game by defeating all other players or by building the largest, best colony!

Since this is an early access release, some features are not yet available. Stay tuned for the next release!
Gameplay