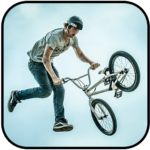 In this bicyle bmx freestyle game you will face different types of stunts and many different obstacles also will stop you to escape. Mulltiple levels and stunts design in this game use your Speed and tricks to reach the destination in the given time you can customize your bmx from selection area many different designs and characters are available for you to choose.