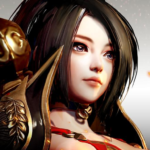 [Blade of kingdoms] South Korea’s efforts to develop game masterpieces! Powered by the UE4 engine, the dynamic and delicate picture quality is perfect, super smooth and striking rhythm and dynamic, officially surpassing all the legends in the past game history, gorgeous confrontation will shake the earth! The king is on the horizon!

[Happy COMBO, high-end operation dripping experience]
Created by Korean game makers 4:33 and ActionSquare, the emphasis is on the rhythm of the rhythm and the sensation of COMBO. The super-high-quality shocking picture makes you love it.

[Image quality peak, UE4 casting]
With the powerful expressive power of the Unreal Engine 4 engine, the details of the military commander and the scene effects are quite gorgeous. A super-quality picture that goes directly beyond the highest-end game specifications of the current generation.

[The chaos of the world, the heroes and the world want to swallow the world]
During the Eastern Han Dynasty, the seemingly eternal dynasty began to decline because of the faint emperor and corrupt bureaucracy. At this time, people who grasp the chaos of the world and intend to swallow the world have appeared…
The diversified combination of interactive and exploratory functional elements and different team gain effects make every legendary famous player’s ability to the fullest. At this time, you will lead the historical wheel, and in this troubled world, you will create your own dynasty.